We recommend that you use one of our Custom-built-for-you Batch files or Powershell files that you will find on your Software and deployment builds page or follow one of our RMM deployment guides. But if you need to build a custom installation we have included this page for reference.

The software is packaged as an MSI which you build on the custom builds page. It supports all the typical command line options of an MSI for example:

The following command would install the software with minimal user interface visible to the user and no cancel button and then reboot the computer.

The following would install the software with no user interface and would not reboot the computer.

You can also customize the name of the desktop icon. By default, it is named “Helpdesk Button” but if you wanted to have the icon named “PC Solutions Support”, this would get you there.

Putting those things together, you would end up with a command like this:

Note to powershell users: powershell requires an extra single quote around the WRAPPED_ARGUMENTS value. So the powershell equivalent command looks like this:

You would still need to reboot after hours though, the software does actually need a reboot most of the time.

If installing the software by starting the MSI without any command line options you will get a default shortcut name: “Helpdesk Button” and the MSI will allow you to select the launch key. You can use our Tier2Scripts system to change this icon on install by using the script listed here.

To make this process a bit simpler we have added the ability to uninstall endpoints remotely this feature will only work on endpoints with version 0.6.x or newer.

Select the endpoint(s) you wish to remove, select Remove Endpoints and click Apply.

The next popup confirms the remove and gives the option to run the uninstall command on the endpoints chosen. 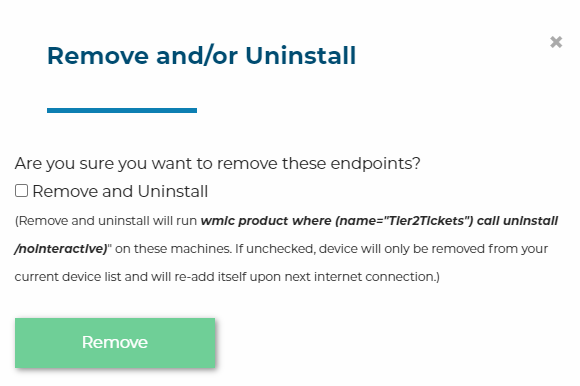 NOTE: if you get back “ReturnValue = 1603;” from this command, then the removal failed because you are not in an elevated command prompt.